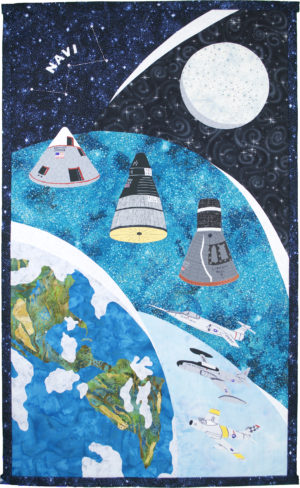 Virgil I. “Gus” Grissom: An Original

My work is in honor of and a memorial to Virgil “Gus” Grissom, one of the original seven astronauts. I chose flight as the theme of my quilt which is depicted by air and space craft that he flew and commanded.

It begins in the US Air Force with a 1952 F-86 Sabre, the jet flown in the Korean War. An an instructor pilot at Bryan AFB his training craft was a T-33 Shooting Star or “T-bird”. In 1957 at Edwards AFB as a test pilot he flew the F-104 Starfighter.

The three space capsules represent his career with NASA. In 1961 he was pilot of the second Project Mercury flight Gemini spacecraft named Molly Brown in 1965. Designed and build around him it was humorously referred to as “the Gusmobile.” Last of the space modules is Apollo 1 where on January 27, 1967, Gus Grissom, Ed White and Roger Chaffee lost their lives when the interior caught fire during a pre-launch test.

Above these I placed the star, Gamma Cassiopeia. Nicknamed Navi (his middle name spelled backwards) along with two other stars for White and Chaffee, it was used on his Apollo 1 mission planning star charts. Succeeding Apollo astronauts continued to use the names as a memorial.

← Wait Till The Moon Is Full Verne´s Moon →